The Reason why I Began to Paint

I 'd like to speak about the reason why I became a painter in relation with my experience of the civil war in El Salvador.

In 1977, I went to El Salvador and married a Salvadorean whom I met in Japan. I left all that I was doing in Japan. But at that time I had any relationship with "art".

I began to work at the cramming school for Japanese children in the capital city. But it happened me not to continue it because of a shocking news.

There was an election of the president in March, but it is said that the government won by injustice. And for the result there happened a riot in all the country. It was the prelude of the civil war until 1992. The beginning of so called “civil war” can be said that began in 1979 the year when Nicaragua succeeded to establish the revolutionary government, and was caused by this fact.

The shocking news for me occurred when two Japanese heads of joint companies were kidnapped and found dead.

Then 230 Japanese families who were sent by the Japanese companies went back home in one night. It was in just one night!

I lost the work which I could just have had, and I lost all the acquaintances from Japan whom I could have just known, and with whom I could speak my own mother tongue Japanese.

In 1980 March 24, the Archbishop Oscar Romero was assassinated while he was singing the mourning mass in the chapel of a hospital. It was the super shocking news because he was the only one who could connect the government and the guerrillas. And he was a man who could understand the disaster of the people who were oppressed in their daily life. After that, the civil war was got worse and worse.

The situation was horrible not only for the soldiers and guerrillas but for the people in the daily life. We could see some dead bodies everywhere and even the school children were forced to serve for military.  And also they kidnapped those who were working in the street to obligate them for the military service. So there were many people missing and sometimes found dead in the street.

Some of my husband's colleagues were missing and assassinated, and many of his friends went out the country just as refugees.

One day my husband told me that he was nominated as the president of the university. I told him not to accept that. After two presidents were assassinated, the danger could be very realized for him and the family.

Then he made up his mind to find some countries to accept us as refugees.

In Mexico there were Australian and Canadian offices which would accept refugees from Latin American countries. When my husband's application was almost accepted in the office of Australia, he called me to go there with our daughter.

I met a lady in the office, and she was very kind "at first ". She asked me if I could speak English, I told her yes but not perfectly. She asked me to show my passport, and I showed it to her. I thought there was no problem.

But when she saw my passport, suddenly she changed her expression so much that I felt something worried.

Before we decided to find the way to Australia, I went to the Japanese embassy in El Salvador to ask the working visa for my husband. But they refused us saying,

“ You know Japan is a country for men although it is unfair for the women, it’s true. And we cannot change this fact. If a man is Japanese and his wife is from any country, we can give her a long stay visa, but if a woman is Japanese and her husband is from another country, we cannot give him a long stay visa or working visa. Although the Japanese woman could be a millionaire, this fact cannot be changed. Only when the man could have some special technical ability needed by Japan , we could give him a working visa. “

This is what they told us. We couldn’t have any kind of hope for Japan when the Japanese consul told us so clearly.

For us Australia was the last country to have a hope to live. So I had to tell her honestly that we were refused.

Then! The lady began to get angry hitting the desk with her hand standing up.

For 8 years I was in El Salvador under the civil war and I didn’t know anything  about my own country, about the world problem, about the problem of so called boat people. I had never got such a negative experience with my passport. I had never imagined my own country could have such a bad reputation. I got surprised and I could not say anything.

Then she got a little bit calm down and said. “OK. If You say so, go to the Japanese embassy in Mexico and ask them to write on a sheet the reason why they cannot give  the working visa to your husband, and  show it to us . Then we could listen to you again.”

I thought some hope could be left by her words. So I went to the Japanese embassy to say what she told me. I didn’t think anything but getting visa of Australia with my family as any kind of refugee. I didn’t have any kind of feeling against that council of Japan who told me the simple reality. I thought simply that knowing reality we had to be in the start line. All that he told me meant that there was no way to go to Japan if not we exchange the sex. For me it was only the way to beg the representative of Japanese embassy of Mexico write what the Australian lady asked in order to get out El Salvador alive.

In the Japanese Embassy, they told me that they couldn’t do that. But they told me, “There is only one thing that you have to do. Write an application for your husband’s working visa, and we can think about it. Don’t decide the conclusion without trying anything. To apply it, you need to find somebody as a guardian in Japan who can look after your family with economical responsibility.”

8 years passed from when I got out of my house without getting any response from my family and I couldn’t find any person who could be our guardian in Japan. The word “with economical responsibility” was too heavy for me.

I could not be that kind of guardian for any kind of refugee even I could imagine he could die. How I could ask help what I myself can’t do it!

On the way to the hotel, I was thinking and thinking and one moment, I remembered one person. He was the only one with whom I had communicated and given me some response. He was a professor of Chinese literature of my university and was an extraordinary pure man.

I asked my husband one thing. “To find such a man that the man of Japanese embassy asked is almost impossible for me now, but if you want to bet on 1 % of possibility , I will try to ask a person who could answer me in 1 % of possibility.”

It was really miraculously, that I had his own calling card in my bag, the card with his address and his words on the back, saying “if ever something happens and you need some help, use my name.”

I put his name on the application sheet as a guardian in Japan. Later I wrote him about what had happened to us and that we used his name, but that we didn’t mind if he refused us , because then we could try again for the apply the refugee status to Australia .”

When we got back to El Salvador to wait the answer of that professor and of the Japanese embassy in Mexico, I got the telephone call from Japan. My professor had accepted to be the guardian of our family and began to find the job for my husband. He had many personal connections in the members of the government, foreign affairs, journalists, and academic world. He called out all of his connections, finally he found a job for my husband.

The 1% of chance got realized. We won the bet. In 1984 September, we could start our new life in Japan.

When I was thinking about all of these experiences, I wanted to publish some of my essays that I wrote in my diary for 8 years. I have had a habit of writing diary from the age of 8, and especially after when I began to live in the non-Japanese speaking society, I did it because I was afraid that my own mother tongue would be overcome by another language.

But to publish essay was too expensive for me who had just begun the new life in Japan. Then I began oil painting to show in art exposition. I had never painted in my life except in class in my school days. But I had some influences of art, because my father who died when I was 8 years old was a painter, and I was brought up in the atmosphere of my father’s art.

So I began to paint, and I got the prize in one art exposition of Nika-ten, when I was 50 years old. It was about the lady crying on her dead son. Later I got 3 prizes for the paintings about the civil war. One of those, I donated to the office of the hospital where the archbishop Romero was assassinated in San Salvador.  The title is

“One seed of wheat falling”.

These are the photographs of the assassination of Monseñor Romero. They used my painting on the jacket. 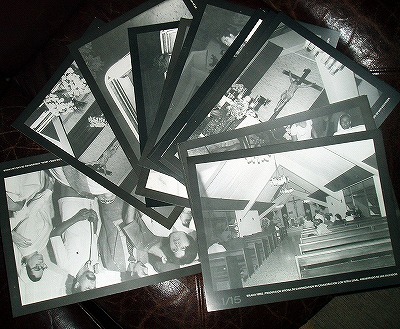 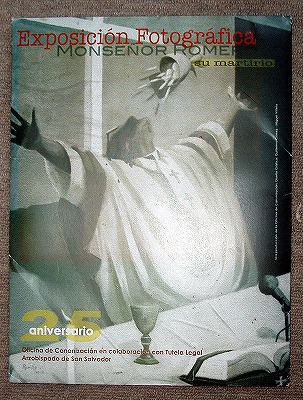 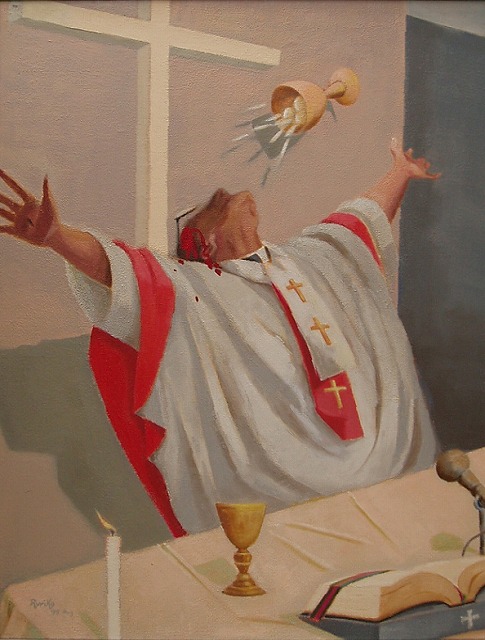 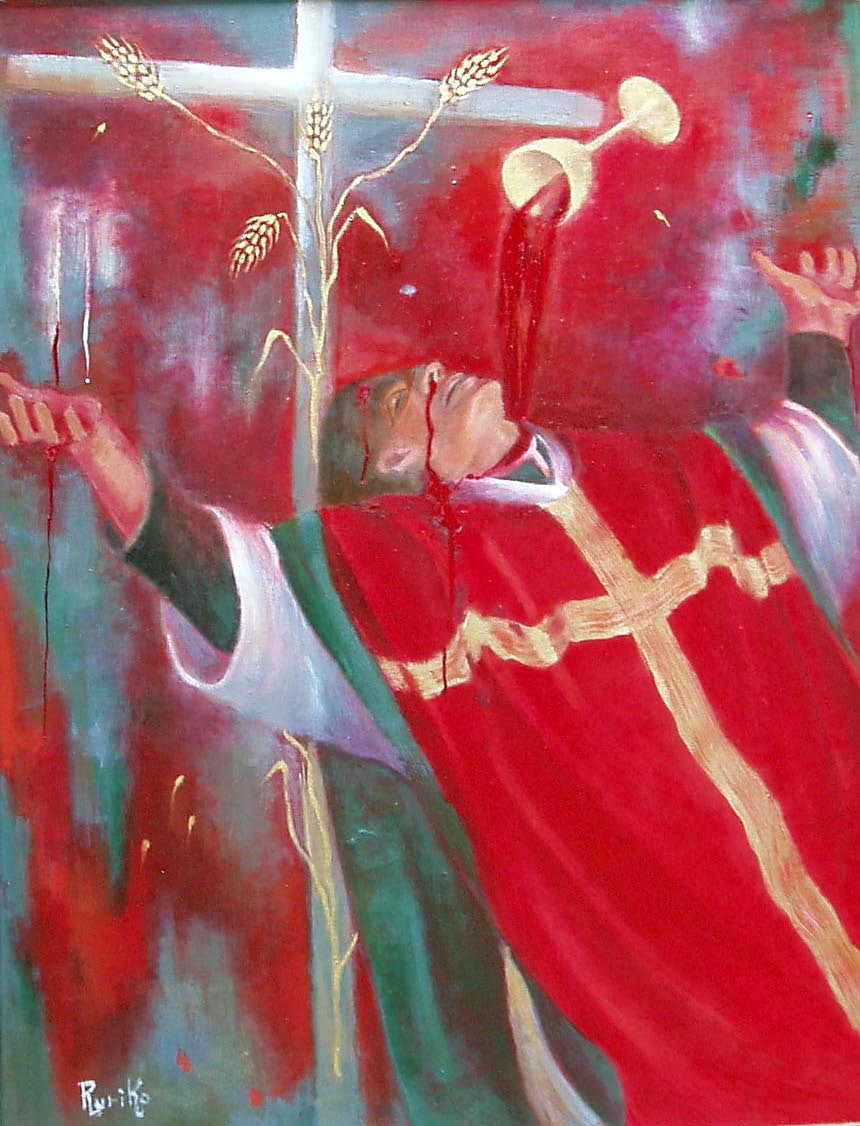