A story of a lady I met in El Salvador

She was a very tender, intellectual, and educated lady. She may be about 10 years younger than me. Her husband Emilio was a colleague of my husband Enoc in the university. A little later than the birth of my baby, their daughter was born, so we had many things in common to talk about.

Maria had 5 brothers, and all of them were so good at music that they made a band. Then many times we invited all of them for parties. They were the main characters in our home party.

One day, Enoch offered our house to Emilio, and he went for work leaving me and our baby. Emilio stayed one night in our house, but next day, he brought some members of his group in the house.

For the first time, I didn’t notice anything strange, but later, I noticed that one of them was looking out with cautions at the street from the crevice of curtains hiding himself not to be seen from outside. He seemed to be “a watchman” who looked out between the curtain and the wall inside. I felt something suspicious and began to watch them in a casual way finally to find what it meant instinctively. I was sure that they would take precautions against the police force.

To see them, I felt my body stiffened. In the house there were just my baby and I. How could I protect my baby if something serious happened? I was completely defenseless. In that case only the thing I could do was to act completely ignorant about anything. I made myself as an unthinking ignorant woman who wouldn’t know Spanish. I thought I had to make myself an innocent foreigner who just knew to take care of her baby, to cook meals, and to wash clothes without thinking anything more. I completely knew and understood the danger to “know” and the “terror to manifest” at that moment.

I was carrying my passport to prove my Japanese nationality with me even in my own house. I just smiled at the members of the group of Emilio acting as if I could not understand any words in Spanish if though they spoke to me any words. I thought that only way to deceive enemies must be to deceive the ally. I fondled my baby in Japanese way, saying with loud voice, “beroberobar” or “kaiguri kaiguri tottonome” which were meaningless words only to amuse babies.

Time flew from that. We moved to another house, without being told the reason why. One day Enoch brought all the family of Maria to our house. He told me he offered them our house to stay from then. Enoch didn’t know what I saw at that time with Emilio and his group, because I didn’t tell it to him with fear.

I was afraid that “to know some fact” could invite worse situation to share life and death. Even if one of us knows something serious, we had better be silent. When something happened, I could say I was the only one who knew it, and that he didn’t have any relation. Then one of us could live and one who could be alive can protect our baby.

Maria and Emilio with 3 children began to live with us. It was no doubt they were escaping from police force. The fact that they could not live in their own house meant that they had some serious problem. I knew what it meant. I knew that not only his family but also my family had to owe the same destiny to be annihilated.

I could not say I didn’t know about the noble mind to save our friend scarifying our own lives. But I didn’t have such nobility as an animal which had instinct to take precedence to protect its baby. I was suffering. I wanted to protect my baby, not another’s baby but only mine. I lived completely egoistically and thought only such a thing.

I could not get rid of the suspicious scene of that time when Emilio and his group members had a meeting in my house while Enoch was absent. The new place we began to live was very near to the base camp of the soldiers. If there happened a situation that Maria’s husband would be arrested in this house, the two families could be annihilated.

I had seen many families annihilated. They didn’t go through the proper formalities as “arrest”. I knew they would get into the house and shoot everyone and destroy making the entire house Blood Sea in one moment. I felt just fear. I imagined the worst scene and I decided to protect only my family.

“I have to let this dangerous family whenever I will do anything dark.” In the depth of my heart, I ruminated of my decision.

The children were naughty as they were just children. They made mischief which was very common all children do, and which could be able to over look. I thought in my depth of my heart to make use of their mischief. In the depth of my heart, the dark instinct was beginning to grow.

When the two went out leaving us their children to take care, I told Enoch, “I don’t know how to take care of the children because I never had a chance to be a baby- sitter. Even taking care of my own baby is too much for me, because I don’t have any experience for it. They open the refrigerator without asking permission and take foods which I stocked for some serious situations. They get into anywhere to pull out everything to play with, and never tidy up. They are not my children so I cannot teach them anything so strictly. I don’t know how to say in Spanish in many occasions. I don’t know how to do to take care of these children whose language and habit are different from mine. If there some accidents would happen, I cannot take responsibility, etc. etc.” I told him all of these with a serious look.

Then Enoch answered very simply without any opinion against, “well. I got it.” He told them and arranged in some way, and their family went away. I saw some expression in his eye when he looked significantly at me, some expression which could be seen that he penetrated my true idea. But the both did not say anything more. I thought he “accepted” what I meant.

After that, they took refuge to Mexico which made me feel relieved to forgive myself. But three months later, they came back to El Salvador for the problem of their children’s school.

One week after they got back, Emilio was shot and dead, when he went to school to take their children home in the very school ground. One who was shot and one who shot were fathers who had children in the same school.

Maria knew the man who shot her husband. When I met her after the death of Emilio, she threw her glance at me, which made me feel her very deep thought and sensibility, and said,

“I know the man who shot Emilio. But I don’t want to pursue him.”

T he man who killed Emilio had a son of same age as her son. She told me there were too many children who lost their parents, and any revenge could not solve the problems. Maria was a noble mind lady. I was sure that she would be a lady who lived with love which was one step above over ordinary human love.

When I saw her noble attitude, I was ashamed of what I had done for her family. I knew there were not any relations between his death and my deed I once let them away from my house refusing to help them. But I felt hurt comparing Maria and me. I refused to save them just thinking of the safety of me and my family and only thought to deceive even my husband and them. This painful experience would make me suffer all the life as my own problem of conscience.

Ah! What a noble lady Maria was! She was a lady who never lost her self-control whatever happened, and kept her generosity and nobility. How easy I could have felt if she could have been a person showing herself confused and upset as her instinct made her to be!

However, she never got panic and she did everything calmly and courageously even in her husband’s mourning ceremony. She told her children who got panic, “your father was an honest man of justice, so went to heaven.” She was making a fresh resolve to live with a pride of her husband, hugging her children just as a mother hen protecting her chicks, and also took care of her baby who was going to be born. She was supported by a pride, the pride of her husband who had fought against the government at the side of people, and devoted his life for the people.

Then. Then the things were not over. The people who had been with Emilio and Maria, and even those who had attended to his funeral were disappeared one after another. The members of Maria’s family also disappeared. The cheerful 5 members of her brothers who formed a band were kidnapped, imprisoned and their dead bodies were thrown on a street and in her family only her old mother and Maria with her children were left. When at last her uncle was killed, she cried to the soldiers with guns who came until the burial place of her uncle.

She roared at her top of her voice, kneeling on the ground, beating the earth with her hands. She forced out the words which nobody could have imagined to be out from that noble dignified lady who had been always calm and never could be panic. How can I translate those kinds of exclaim in another languages! I cannot translate in any kind of human languages, the heartrending voice which came out from the lady, glaring at and tearing the air!

In this case, what was the translation mean? What does it mean to change the words by words in another language? If I dare to translate them only that I could do is to show her voice as a cry. 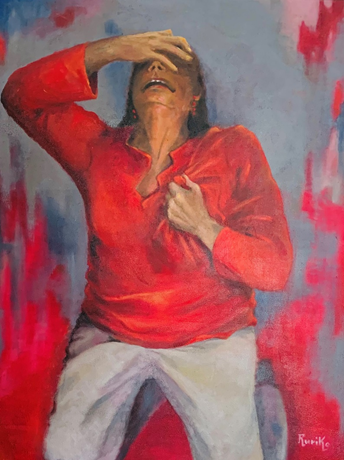 « Essay on the Difference of Religions いろいろな宗教について（番号不明） »
スポンサーリンク
プロフィール